To get the intuition of what is left and what is right turn, consider an example shown below. 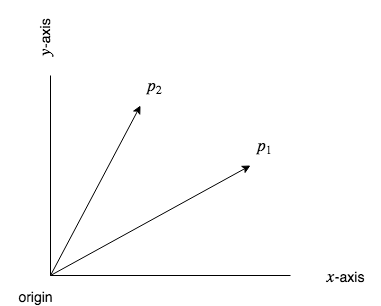 Similarly, if $p_1 \times p_2$ is negative then $p_1$ is anti-clockwise from $p_2$ with respect to origin and if the value is 0 then points $p_1$, $p_2$ and origin are collinear. Following python code implements the cross product.

One special case arises when the method direction returns neither positive value nor negative value but zero. In this case, all the points $p_1$, $p_2$ and $p_3$ lies on the same line. In this case segment $p_2p_3$ doesn’t turn to any direction.