In this article, I am going to apply divide and conquer algorithm to find the closest pair of points from the given set of points. Two points are closest when the Euclidean distance between them is smaller than any other pair of points. The Euclidean distance between points $p_1(x_1, y_1)$ and $p_2(x_2, y_2)$ is given by the following mathematical expression
$$distance = \sqrt{(y_2 - y_1)^2 + (x_2 - x_1)^2}$$
We can find the closest pair of points using the brute force method in $O(n^2)$ time. Using the divide and conquer techniques we can reduce the time complexity to $O(n\log n)$. Even though algorithm described in this article takes $O(n \log^2 n)$ time, I will give you the idea on how to make the complexity $O(n\log n)$ towards the end of the article.

Before passing into the main procedure of the algorithm, the given set of points are first sorted by x-coordinate and y-coordinate respectively to create two separate point sets $P_x$ and $P_y$. The algorithm proceeds as follows.

Consider a set of points divided by a vertical line $l$ (shown by a red line) as shown in the figure below. 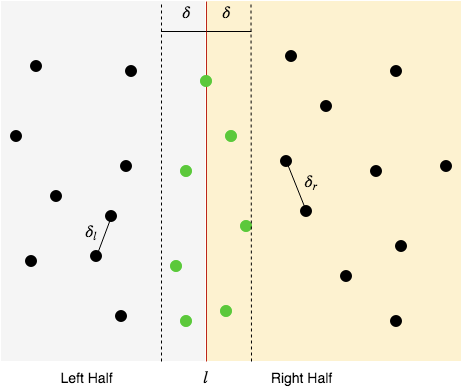 That means, we use $P_y$ and find the closest pair of points by comparing the distance between a point with its at most 7 neighboring points (for the proof see here) for every point inside the area. In the worst case, if all the points lie in that region, the complexity will be $7n$, which is linear.

Before calling the main procedure, we sort the points by $x$ and $y$ coordinates respectively.

px and py are passed to the function closest_pair that find the closest pair of points.

Base case is straightforward. Use brute force when the number of points is less than 4.

Finally, the implementation of step 5 is

The recurrence relation for this divide and conquer algorithm can be written as
$$T(n) = 2T(n/2) + O(n\log n)$$
Since we are performing sorting operation inside the divide step, the algorithm spends $O(n\log n)$ in each recursive call. The overall complexity is, therefore, $O(n\log^2 n)$.

Line numbers 13 - 16 in closest_pair function can be improved. Since px and py are already sorted, we can get the sorted halves in a linear time. This sounds like an opposite operation of merge procedure in merge sort where we find the sorted list from two sorted lists in linear time.